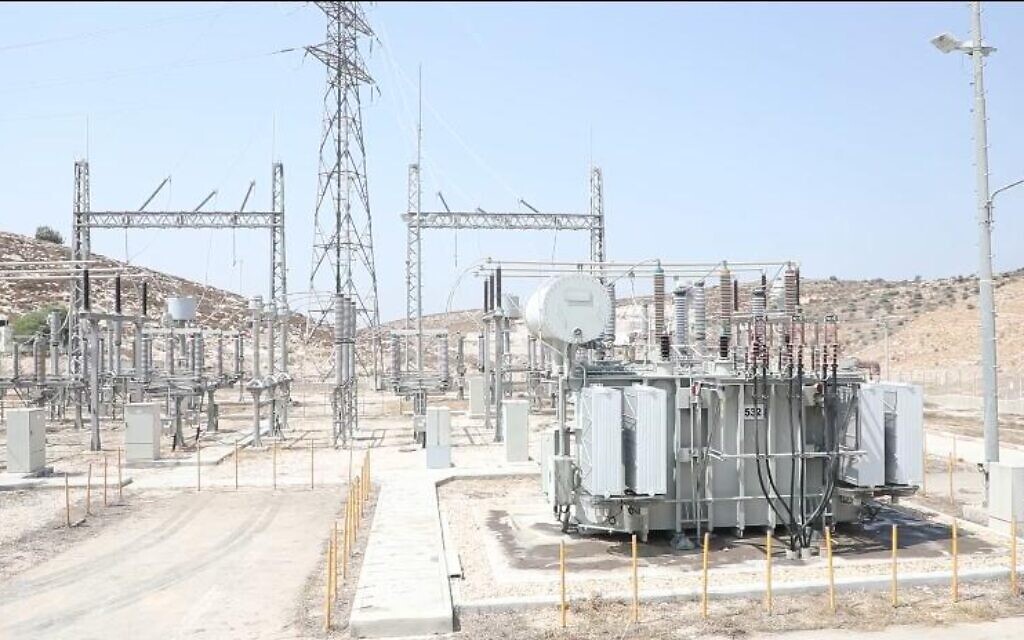 The Israel Electric Corporation has threatened to start cutting off power to Palestinian areas of the West Bank next week for some NIS 383 million ($120 million) in unpaid bills.

Starting next Wednesday, power outages will continue to affect West Bank areas near Jerusalem, including Ramallah and Bethlehem, until debts are paid or a deal is reached, Israeli and Palestinian officials said. .

The story was first reported by the Kan public broadcaster.

Palestinians depend on Israel for almost all of their electricity, but often fall behind in payments to Israel, periodically triggering crises as the IEC attempts to pressure the Jerusalem District Electric Company, known under the name of JDECO, and on the Palestinian Authority to pay their debts.

In the past, Israel forced the IEC to continue providing electricity out of concern for the Palestinian population.

“Israel deliberately creates crises, especially as we enter the winter season, in order to serve its purposes,” al-Omari said in a statement.

Acknowledging that he will not be able to immediately release the funds, Ramallah has presented Israel with a list of areas he is asking to be excluded from the no-go zones, Kan reported. These include cities with hospitals or other essential facilities.

The past few years have seen the Palestinian Authority plunge into an economic crisis further aggravated by the pandemic. As the conflict with Israel continues to drag on with no solution in sight and Ramallah continues to postpone its first elections in more than 15 years, the international community’s willingness to fund the Palestinian Authority has also diminished.

The IEC took similar action two years ago, cutting power to parts of the West Bank over a NIS 1.7 billion ($500 million) debt owed by the main Palestinian electricity distributor for the West Bank. The cuts lasted about three months until the PA managed to pay half the debt in January 2020.

In 2016, Israel and the PA reached an agreement to settle a debt that had accumulated to NIS 2 billion ($530 million), with Ramallah agreeing to pay Jerusalem NIS 570 million ($132 million) . The remaining balance of 1.5 billion shekels ($397 million) was to be paid in 48 installments.

Under an economic agreement signed with the PA in 1994, Israel collects about NIS 600-700 million ($159-185 million) each month in customs duties, which are levied on goods destined for Palestinian markets that transit through Israeli ports.

He transfers the money after deducting about NIS 100 million ($26 million) for expenses including Palestinian hospitalizations in Israel, sewage treatment and part of the electricity debt, which has remained largely stable. these last months.

In January 2015, the IEC cut off electricity to Palestinian towns for a number of hours each day for a similar debt, only to permanently renew the electricity supply a few weeks later.

The climate crisis and responsible journalism

As an environmental reporter for The Times of Israel, I try to convey the facts and science behind climate change and environmental degradation, explain – and critique – official policies affecting our future, and describe the Israeli technologies that can be part of the solution.

I am passionate about the natural world and discouraged by the dismal lack of awareness of environmental issues shown by most of the public and politicians in Israel.

I am proud to do my part to keep The Times of Israel readers properly informed on this vital subject – which can and does lead to policy change.

Your support, through your membership in The Times of Israel community, allows us to continue our important work. Would you like to join our community today?

Join the Times of Israel community Join our community Already a member? Log in to stop seeing this

Are you serious. We appreciate that!


We’re really glad you read X Articles from The Times of Israel over the past month.

That’s why we come to work every day – to provide discerning readers like you with unmissable coverage of Israel and the Jewish world.

So now we have a request. Unlike other media, we don’t have a paywall in place. But since the journalism we do is expensive, we invite readers to whom The Times of Israel has become important to help support our work by joining The Times of Israel community.

For just $6 a month, you can help support our quality journalism while benefiting from The Times of Israel WITHOUT ADVERTISINGas well as access to exclusive content available only to members of the Times of Israel community.